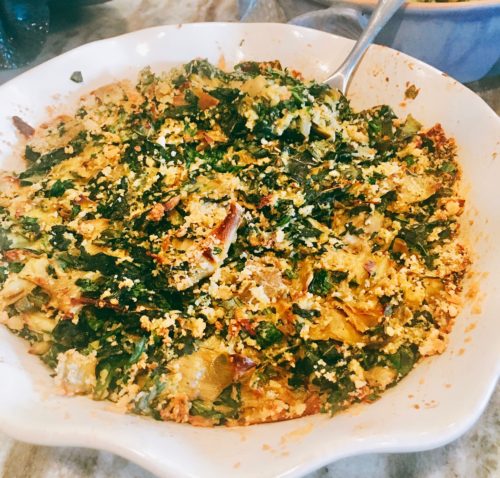 This is my new favorite recipe. It’s everything I love — a lot of artichoke hearts, a bunch of spinach, a little Parmesan and even smaller amount of egg. I adapted this recipe from the now-out-of-print cookbook, My Love for Naples. This is one of those foods that can be eaten at any time of day and either room temp or straight from the oven. It would also be a terrific picnic food because, like a quiche, it holds its shape nicely.

My go-to appetizer for the past two years has been roasted artichoke hearts, socca, stuffed grape leaves, feta, and olives. I buy frozen artichoke hearts from Trader Joe’s, roast them with olive oil and salt until slightly crispy and browned and then sprinkle a little fresh lemon juice on top — insanely good. This recipe just sorta goes one step further incorporating a few of my absolute must-eat-a lot-foods. I suppose you could make this vegan, but it might not hold together as well. And you can most certainly make it gluten-free, as I did by using gluten-free panko bread crumbs because I had a dinner guest who could not eat gluten. Ok, let me clarify that, because I live in Boulder, they “elected not to eat” gluten. Whatevs. I get it. I’m actually a very picky eater (just ask my family), so I give anyone and everyone a free pass with regard to food hang-ups. Kudos to them if they can resist the power of the flour, but damn, I do love good bread and pasta…

Oh, if you don’t have access to frozen artichoke hearts, you could absolutely use fresh. Be warned, it will be a royal PIA to pare them down from the globe, but it could be worth it if you have the time and if they are plentiful. But I would certainly shy away from the artichoke hearts in cans of water because you just simply won’t get that same depth of flavor. And definitely, don’t use artichokes marinated in olive oil.

Ok, basta! On to the recipe… 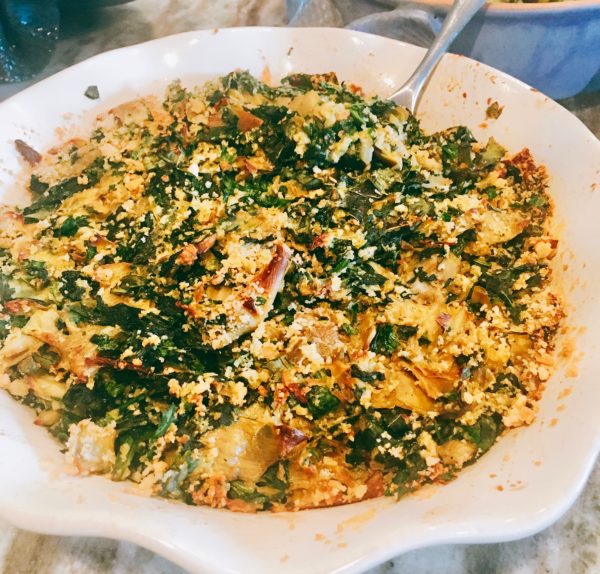