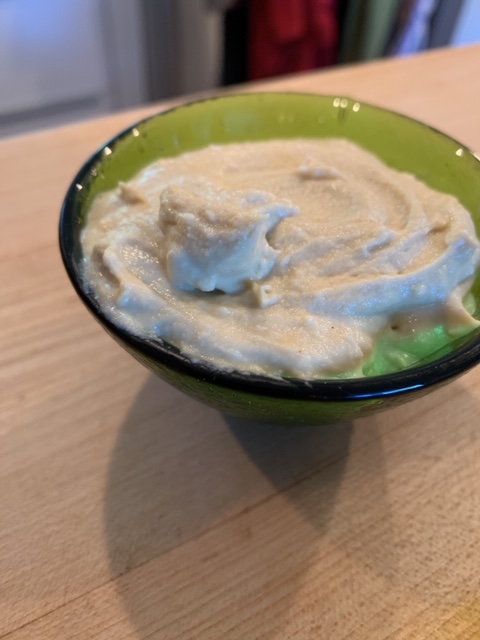 I’ve been attempting to make the perfect batch hummus since my mid-twenties. You know, the kind that’s silky smooth, with just a hint of garlic, lemon, and tahini. The kind of hummus that spreads like Jiffy peanut butter.

In the years Before Instant Pot (BIP), I would agonize over cooking chickpeas. Of course, a large chunk of this time was spent at altitude, in both New Mexico and Colorado. This complicated chickpea cooking. But that’s no excuse. As a result, my hummus batches were often grainy or, even worse, umm, crunchy.

I gave up making hummus for decades. One time, visiting my dear friend Amy in Florida, she bought some local hummus from an Israeli deli. And there it was –Jiffy-like Hummus. The experience set me back on my quest. In earnest, I tried again to replicate the hummus when I returned home, but failed miserably.  I bowed my head in shame and once again bought pre-made hummus in a plastic tub.

This shouldn’t be a huge deal. It’s just hummus, after all. But (well, this is embarrassing) for a period of about three years I ate the exact same thing every single damn day for lunch: brown rice (or sometimes branching out to quinoa), a rather large dollop of store-bought hummus and about a quarter cup of homemade jalapeno-sauerkraut often served over a handful of arugula. My children would often make gagging noises if they were home when I would pull out the components for my midday feast. I didn’t care. I craved this meal like those women from the past who are found secretly eating dirt because they lack iron in their diets.

So hummus, for me, wasn’t just some occasional sideshow. It was a daily meal. I had to figure out how to nail the recipe.

This summer while walking around the Boulder Farmers’ Market I met a man, an angel really, who had been in charge of making the hummus at a famous new Israeli Denver restaurant. Locals would drive miles just to eat the restaurant’s hummus and would frequently buy small $8 containers to take home because it was just that crave-able.

I asked him if he would consider divulging the secret: How on earth do you freaking make hummus? Without hesitating, the angel spoke: baking soda. That’s the secret. Baking soda.

I immediately went home and within a day I had FINALLY replicated my favorite style of hummus.

Print Recipe
Perfect Hummus
1 cup of organic chickpeas soaked overnight with 1 tablespoon baking soda. The next day: rinse chickpeas well. Cook chickpeas with a teaspoon of baking soda in your Instant Pot (if you don’t have an Instant Pot, I simply cannot assure you that you will achieved the desired texture). Cook with plenty of water covering the chickpeas for 25 minutes at high pressure. Let pressure naturally release. Drain chickpeas and slightly, but not all the way, cool. Continue following recipe below...