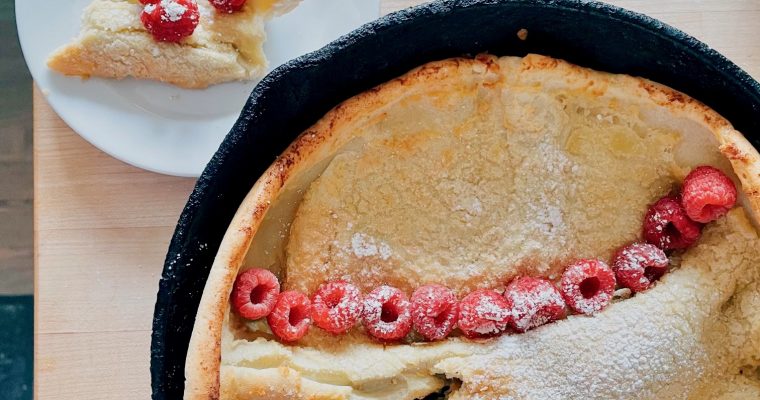 Snowy days, rainy days, after school, before school, weekend mornings…I’ve been making this for my girls for over twenty years. In the fall and winter I serve with sautéed apples and cinnamon sugar. In the spring I serve with fresh strawberries or raspberries, and in the heart of the summer, fresh peaches sliced on top is a favorite. Or sometimes I just sprinkle with lemon juice and powdered sugar or even drizzle with a little honey. There are times when it turns out super poofy and other times not so much. It really doesn’t matter because it always tastes delicious. I have not tried using GF flour or attempted to make vegan, but I’m sure it’s worth a try!

I’ve been making this apple galette for over twenty years. The recipe is from a cookbook entitled, Jacques Pepin’s Table. I’ve modified it a bit over the years to make it a little easier to remember. Basically, it’s 1 cup flour, 1/2 stick butter, 1 or 2 apples (depending), and a little honey and cinnamon. It’s been served at countless dinner parties, birthdays, anniversaries — just because — and most recently to help someone ease a broken heart. About 10 years Doug was at a conference and to break the ice they asked everyone their favorite food. He replied that it was my apple galette. Later it was revealed that the question really wasn’t about the food at all, but about who made the food and how you felt about them. Kinda sweet, right?